What great verses to read on Easter morning.  I’m thankful for Jesus.

28 After the Sabbath, at dawn on the first day of the week, Mary Magdalene and the other Mary went to look at the tomb.

2 There was a violent earthquake, for an angel of the Lord came down from heaven and, going to the tomb, rolled back the stone and sat on it. 3 His appearance was like lightning, and his clothes were white as snow. 4 The guards were so afraid of him that they shook and became like dead men.

5 The angel said to the women, “Do not be afraid, for I know that you are looking for Jesus, who was crucified. 6 He is not here; he has risen, just as he said. Come and see the place where he lay. 7 Then go quickly and tell his disciples: ‘He has risen from the dead and is going ahead of you into Galilee. There you will see him.’ Now I have told you.”

8 So the women hurried away from the tomb, afraid yet filled with joy, and ran to tell his disciples. 9 Suddenly Jesus met them. “Greetings,” he said. They came to him, clasped his feet and worshiped him. 10 Then Jesus said to them, “Do not be afraid. Go and tell my brothers to go to Galilee; there they will see me.” 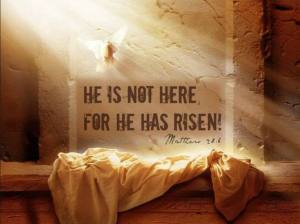 This blog is written by Todd Christenson. He was raised in Nebraska and currently lives on Long Island in New York. Though out my childhood, my family attended church. We prayed together at meals. I thought I was prepared for life. After college, I moved to New York City. Shy, unsure of myself, building an identity in worldly things, increasingly prideful, self-righteousness, a controlling nature. In 2013, God spoke through someone, suggesting I confess my sins. I did. I realized that every day, I’d been glorifying myself, not God. Today, God’s teaching me to have my identity in Him, only, my dependency in Him, not myself, being who He wants me to be, not the world, loving Him first, loving others as myself.
View all posts by GettingCloserToOurGod →
This entry was posted in Jesus. Bookmark the permalink.

The Lees in Cambodia

A glimpse of our journey with God in Southeast Asia

Getting Closer to Our God #GCTOGOD

Planting seeds one step at a time

Philippians 4:13 (NIV) I can do all this through him who gives me strength.

The World According To Neema

The daily struggles and joys of a Grandma with Fibromyalgia

Since 2015 Commenting on the Revised Common Lectionary